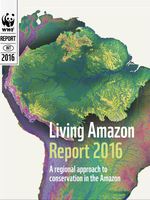 The Amazon is under pressure from unsustainable economic activities and is undergoing unprecedented change, according to WWF’s Living Amazon Report 2016 released today. The report highlights the regional and global realities that are impacting the Amazon and demonstrates why cooperation is so critical to the area’s future. The Amazon spans eight countries and one overseas territory. It is home to 34 million people, 350 indigenous groups and one-tenth of the world’s species. According to the WWF report, more than 2,000 new species of plants and vertebrates have been described in the Amazon since 1999. Despite the diversity and critical importance of the world’s largest rainforest and river system, the report warns about the dramatic increase in legislative actions to downgrade, downsize or degazette protected areas in the Amazon.

Read 1699 times
Published in _Amazon Global
More in this category: « Amazonia Security Agenda : Strengthening the water, energy, food and health security nexus in the region and beyond Protecting the Amazon Demands Radical Change »
back to top